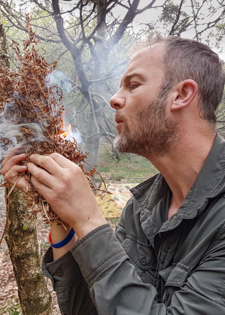 From an early age Craig could be found wandering around his local woodland with a Swiss Army Knife in one pocket, a tobacco tin survival kit in the other and a very dog-eared copy of Lofty Wiseman’s SAS Survival Handbook under his arm.

This love of adventure and the great outdoors never really left him as he progressed from the local Army Cadet Force to a 16-year career in the British Army.

Along the way Craig was fortunate enough to not only pick up a range of instructional qualifications relating to outdoors life but also the opportunity to put them into practice in far flung such places as the Bavarian Alps, the jungles of Nanyuki in Kenya and Belize, Red Rocks and Joshua Tree National Parks in the US, Norway, Spain, Cyprus and various areas of the Middle East.

Upon leaving the military and starting a desk job Craig still longed for the taste of the wild, which ultimately led to him discovering the subject of bushcraft and attending his first field course with Frontier Bushcraft in 2017.

Craig has returned year after year to further develop his bushcraft skills as well as undertake a number of Frontier’s online courses. This pursuit of knowledge and skills led to him being asked to assist on Frontier Bushcraft courses from 2020.

Craig now lives on the edge of the Snowdonia National Park where he continues to make the most of the great outdoors, albeit at a slightly slower pace than in his younger days!