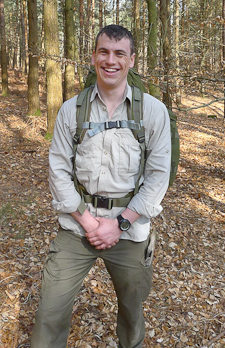 Matt attended his first bushcraft course in 2004 and prior to joining the team at Frontier Bushcraft, was a student of Paul‘s for a number of years.

The catalyst for originally seeking to study bushcraft skills was learning survival skills as a Scout.

Matt has been a Scout since 8 years of age and always had an interest in the natural world, expeditions and camp craft. In his teens he also spent some time as an Army Cadet.

Matt holds a Civil Engineering degree from Loughborough University, where he took a lead role at the university Hiking Club.

Matt is a keen hillwalker and has explored many upland parts of the UK including the Cairngorms, Mamores, Lake District, Brecon Beacons and Peak District but can mostly be found stomping around Snowdonia. Matt also enjoys canoeing, kayaking and climbing.

Matt holds the UK Mountain Leader Award and is a member of the Mountain Training Association.

Matt currently works with his local Explorer Scout Unit. He also assesses skills of those adult volunteers who wish to take young people in to the British Hills.