Skip to Main Content
The Hadza are a tribe of hunter-gatherers in Tanzania.

This statement, however, hardly emphasises their importance.

The Hadza are one of the last societies anywhere in the world that survive by hunting and gathering.

Furthermore, they live in East Africa, an area that is considered key in human evolutionary history.

Despite this, traditional Hadza lands have been encroached upon by pastoralists and farmers.

It’s hoped that a new documentary film due for release in 2013 will bring an awareness of the Hadza to a wider audience.

Hadzaland and the Cradle of Mankind

The Hadza live on the land surrounding Lake Eyasi situated in the Great Rift Valley.

Not far away is the Olduvai Gorge, one of the most important prehistoric sites in the world.

Olduvai (a mis-spelling of the Masai word for wild sisal, Oldupai) where renowned paleoanthropologist Mary Leakey did much of her (literally) groundbreaking work, has been instrumental in furthering the understanding of early human evolution.

45km away from the Olduvai Gorge, Leakey also discovered the Laetoli footprints – evidence that hominins were walking on two feet 3.6 million years ago.

It is postulated that the Hadza’s foraging way of life resembles that of our earliest human ancestors. Certainly before the onset of farming 10-12,000 years ago in the Eastern Mediterranean, our ancestors were all foragers.

What’s particularly fascinating is that the Hadza hunt and gather in a part of the world which is rich in fossils giving clues to the history of our species.

In 1935, near a rock shelter on the shore of Lake Eyasi, the German explorer Ludwig Kohl-Larsen found an archaic human jaw-bone which is estimated to be 130,000 years old.

Subsequent excavations of rock shelters in the area have shown continuous occupation since at least the Later Stone Age. These occupants could well have been ancestors of the Hadza.

Today the population of Hadza is around 1,000, with 300-400 living purely from hunting and gathering. They have few material possessions and rely on an intimate knowledge of their environment to sustain themselves.

The Hadza are welcoming, generous and relaxed, spending less time working to survive than a typical office worker.

During Frontier Bushcraft’s Tanzanian bushcraft expedition, we visit the Hadza. We set up a lightweight camp near to one of the Hadza’s camps and then spend the next few days with members of the tribe learning about their way of life and the bushcraft skills they use to survive on a day-to-day basis.

For me, personally I feel it is a real privilege to spend time learning from people who live by a skill-set we choose to call bushcraft. For me it is the high point of the whole trip.

By The Light of a Million Fires

Another man for whom visiting the Hadza had a lasting effect is documentary film-maker Bill Benenson.

In 2004 he and his family went on safari for the first time to Tanzania and “it turned out to be the most fascinating trip of our lives. But it wasn’t the “Big Five” animals, as magnificent as they were, that most struck us, nor was it the vast and stunning plains of East Africa. No, what made the most profound impression on us was seeing and being with a very small tribe of nomadic hunter-gatherer-foragers called the Hadza.”

I knew I wanted to make a documentary film about them because it was clear that their way of life is being threatened into near extinction by a variety of national and international pressures. I felt that perhaps by bringing the world’s attention to the Hadza I could help protect their unique lives from oblivion.” 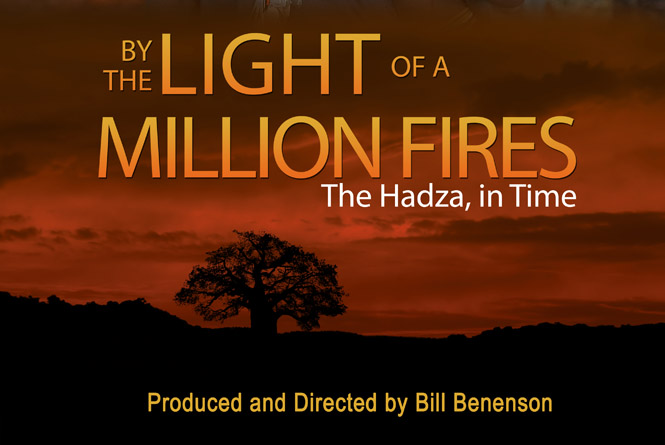 Benenson’s work includes Dirt! The Movie, exploring the relationship between humans and soil. The film was an official nominee for the 2009 Sundance Film Festival and won several other awards.

In 2011 Benenson returned to Tanzania along with Emmy Award winning cinematographer Bob Poole, to film a documentary centred on the Hadza.

The film titled By the Light of a Million Fires after a book of the same name that recorded some of the oral history of the Hadza is due to the released in 2013.

According to the film-makers “By The Light of a Million Fires takes a lively look at human origins in the very place of our origins, Africa’s Rift Valley, where one of the world’s last remaining hunter-gatherer groups, the Hadza, have lived sustainably for over 50,000 years.”

Below is the trailer:

Honey and Our Big Brains

Being Part Of The Wilderness; Not Just Surviving It

The Hadza And The Honeyguide