More About The French River Expedition: 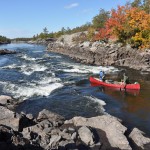 The French River expedition is our foundation-level Canadian canoeing trip. Here you can hone and integrate your bushcraft and expedition canoeing skills. The expedition provides fantastic opportunity to follow the paddles and portages of natives, explorers and voyageurs on a Canadian Heritage River.
Find out more…